Five Ways to Make An Adversary of a Highly Sensitive Person 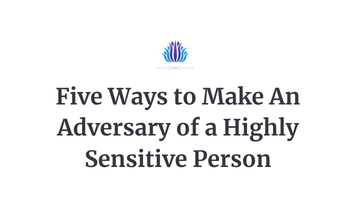 If you know anything at all about highly sensitive people, you probably have figured out that they tend to like harmony. Possibly so much that it can become a liability. If we can avoid stirring unnecessary conflict, we will. We will throw every conflict management tool in the book at a difficult situation before we will resort to actual, full blown battle.

This does not mean we are unable to be stirred to irritation, anger and/or disgust.

Why does it seem like HSP never get angry?

Most highly sensitive people are told they “never seem to get angry.” I don’t think that’s actually the case, but I DO think they are less prone to it than others. Part of the reason behind this is due to the fact that they generally have a wide capacity for empathy. It’s easy for most highly sensitive people to place themselves in the shoes of another. Once you do that, it’s generally difficult to get angry. If you feel put off by a grumpy person standing in line…but you also notice that the same grumpy person is trying to manage his two children, pay the cashier, bag the groceries and…and…and you might be inclined to give them a little slack. If your boss yells at you, you’ll hate it…but you might also consider what could be going on for your boss. Perhaps it doesn’t have much to do with you? She seems exhausted. Maybe she’s not feeling well?

In other words, highly sensitive people tend to be good at noticing small tells that people might not realize they are giving out. And they are good at giving the benefit of the doubt (in most cases). For this reason, a highly sensitive person tends to be less inclined toward anger. Why get angry? It won’t fix anything.

I write this not so much to insist that highly sensitive people are always right in their anger. No one is 100% right. Ever. Rather…I write this because I think it’s strange how often highly sensitive people are dubbed peacemakers and softies. We CAN be. But I think it’s worth bringing to light the kinds of things that can (and often do) incur the wrath of an HSP. We are not perfect. We are just as likely to be rallied to anger as any other. We just get irked by pretty specific things.

If you are looking to diminish our respect for you, give these five tips a try. You’ll find us as worthy an adversary as any other.

But did I miss anything? If you’re a highly sensitive person…I’d love to hear from you. What kinds of things inspire anger in you?