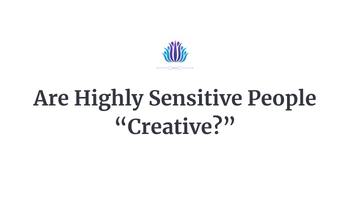 What does it mean to be “creative?”

What does it mean to be “sensitive?”

Are they one and the same?

There was a long period in my life that I didn’t consider myself to be even remotely creatively inclined. I think a big part of that was because my Mom was such a phenomenal artist in the most tangible sense of the word. She could build fountains. She could create paintings and murals. Name an art project I had to do at school, and I’ll report to you just how fiercely I cringed doing it. And, conversely, how delighted my Mom was to help me.

Creative? Me? No chance.

But sensitive…now THAT I knew was a part of me. I knew it before I knew the meaning of the word. I can remember…I was about 6 years old. I was fighting with my friend (also 6) about who-knows-what, and his mom was mediating between us.

I nodded solemnly. A look that said “ahhh. Yes. I agree. Good point.”

I had absolutely no idea what the word “sensitive” meant.

Naturally, I asked my Mom later that evening. She told me “it means you’re easily hurt.”

I decided then and there that I would beat my sensitivity into submission. Easily hurt? That sounds awful! I don’t like it one bit. Who wants to be easily hurt? Who wants that kind of weakness? Because, obviously, it is a weakness. Let’s just be clear about that right now.

So I ran from my sensitivity at every turn, and I spit on it whenever it was within range. I pushed myself into extra curricular groups – despite the fact that I would have preferred the company of books. I learned how to laugh at parties, even though I would have much preferred a quiet bedroom with no sound save the purring of my beloved cat.

But no matter how hard I tried to beat it down, it did not waiver. It was indestructible. Like a whac-a-mole, it kept resurfacing. And my attempts to staunch it were akin to trying to save the sinking titanic with nothing but a giant glob of chewing gum. Or keeping the flow of water from a hose simply by bending it.

Actually…the hose analogy is probably the best suited to describe it. Because, just as with water in a hose that’s been bent to stop the flow, the pressure built. My futile attempts to pretend I was “normal” or maybe even “tough” started to result in unexplained anxiety. Insomnia. Chronic depression.

The irony is that I was heading into perhaps the darkest experience of depression I had ever experienced RIGHT at the time that I was studying holistic health and wellness. I was trying to build a career in the self-care industry. And on the outside, I looked like a perfect champion for its use. I exercised frequently. I ate healthy food. I read all the right books. I was health-nut-equivalent of a badass. On the outside, I looked like I had it figured out. On the inside, I was a mess.

I had set out to defeat my sensitivity, winning a few skirmishes only to find myself losing the war. Ironic, now that I think about it. That something I assumed was a weakness would turn out to be impossible to defeat.

Being incurably inquisitive, I chose to handle my depression with the only weapon I had the energy to wield: curiosity. Because it was curious, after all, why I was tasting all the flavors of despair while consuming some of the sweetest of experiences. Grad school was difficult, but not DEPRESSION worthy. Work was challenging, but not so much that it warranted panic attacks.

At any rate, my curiosity lead me, eventually, to Elain Aron. I’m pretty sure I stumbled upon her book by accident. Meandering the psychology department. It said “The Highly Sensitive Person.” I should have been repulsed by the title. Maybe I was, a little. That would explain why it caught my attention. It would also explain why I picked it up so sneakily. The way a teenage boy would have picked up an X-rated magazine.

I stood there, in that one isle in the bookstore, for easily an hour as I read about myself … from a woman who had never had the pleasure (or misfortunate) of meeting me.

Here was a woman who had the audacity to accuse me of being sensitive. Except it wasn’t an accusation at all. It was a neutral description. A map displaying the location of all my greatest assets, as well as the areas I where my weaknesses were planted. There were no tools for how to conquer sensitivity in it. Just as there are never instructions on how to dynamite your way through a mountain. She merely described the terrain. Offering tips on how to most effectively travel the area. She was like a Lonely Planet for my psyche.

Slowly (painfully slowly) I began the process of healing. I started to apply all that I knew about self care, but catering it specifically to this new information. I stopped drinking caffeine. I reduced the frequency of times I said “yes” and increased the frequency of time spent in nature…in solitude. I found allies in the healing profession who were able to more effectively help me along. Chiropractors weren’t helpful. But yoga therapy turned out to be a life saver. Ambien was a nightmare (literally), but GABA initiators turned out to be tremendously helpful.

I learned how to advocate for myself.  I wasn’t unwilling to do so before. It was more that I didn’t have a language to do it effectively. I didn’t know how to explain my experience, because it seemed so unfamiliar to the people around me. Now I had words to describe it. People didn’t need to empathize with it, but at least now I could help them understand it.

In short – I was beginning to look like a person, again. A productive, healthy, capable human.

Which brings me back to this whole thing about creativity. Remember earlier when I mentioned that I didn’t have any? Yeah…that wasn’t actually true. No, I couldn’t paint sunsets or murals. I wasn’t gifted THAT way. And to the extent that I did, it never felt therapeutic.

But I did have my writing.

I have kept a journal since I was 8 years old. My journals are home to poems. Meditations. Contemplations. Emotional vomit. Intellectual musings.

My journals kept me sane. It was a safe space to let out truths I wouldn’t otherwise even admit to myself.

So to answer my earlier question of whether “sensitivity” and “creativity” are synonymous…I really couldn’t say. But I wonder if they might not be correlated. To create something worthy of notice, you have to notice things yourself. And that’s what being sensitive is really about. It’s about noticing. things.

What about you? Do you identify as a highly sensitive person? What creative outlet (if any) do you find yourself reaching for when you need to express all that you experience?