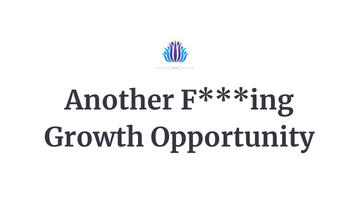 I am perpetually amused by how often people talk about “growth” as though it were some neat and tidy function in our lives. Growth? Why, yes please. I would like some of that. Is that one of the features on the new iPhone update?

You’ve gotta be kidding me.

So I’d like to take a quick moment to burst the bubbles of those who have been duped by inspiring meme verbiage and 140 character “grow through it” quotations.

Growth is basically just purposeful pain. And in order for growth to happen, something has to die.

Let me give me (sorry…let me give YOU) an example of what I’m talking about, here.

A week or two ago, I got into a conflict with a friend. I could relay the details of the conflict…but that always feels icky to me. My version of the story can only be that. MY version. And I am familiar enough with myself to know that I’m pretty good at softening the edges of my own actions when I tell a story (and equally good at harshening the outlines of others’ actions in the telling). I’m not convinced that a partial summary of an unfinished narrative is a valuable use of our time.

Suffice it to say, then, that my friend and I each found ourselves in the unusual position of being thoroughly displeased with each other. Marc Brackett, in his book “permission to feel” makes a point of discerning the difference between disappointment and anger. Disappointment is what we feel when faced with unmet expectations. Anger is what we feel when faced with a perceived injustice. My friend and I were marinating in BOTH.  I committed what she perceived to be a tremendous slight. A crossing of a boundary she was unable to let pass without voicing her hurt and fury. I perceived her reaction to my “slight” to be confusing, cruel and unreasonable. Each of us was disappointed with the other’s lack of foresight and understanding. Each of us was angry with the other’s willingness to cause the other what we both saw as unnecessary pain.

I guarantee you have either seen or been party to some version of this. You do something your partner doesn’t like. He insults you by saying he cannot believe how “stupid and careless” you are. Now you’re so busy being angry at the insult, you skip right on over the validity (or lack thereof) of his complaint.

Or you’re in the middle of muddling through a tough day and you say something with a bit more bite in your tone than you intended…and you say it to someone you love. They respond with “it’s not what you are saying…it’s how you are saying it…”

My conflict with my friend wasn’t anything novel in the universal sense. What was novel about it was the way I related to it.

If you have read anything I’ve written in the past, you know that I am about as conflict avoidant as they come. Growing up, the only conflicts I saw were extremely destructive. They were emotionally draining. They were sometimes even physically harmful for both parties. My take-away? Do NOT get involved in conflicts. In fact, don’t even get ANGRY. They are baaaaaaaad. Sidenote – I don’t imagine my more sensitive nervous system helped matters. Fights that might have barely registered on some people’s radars set off alarm bells in the privacy of my overactive little brain. So there’s that, too.

At the same time, there was a fair amount of instability in my life as a child. We moved both in and out of physical spaces as well as in and out of people’s lives. I learned how to become adaptable. Pleasing. Copasetic. I learned how not to take up space since so many of the spaces I occupied did not belong to me. It seemed a useful survival strategy.

That’s all well and good for a child. It might even work out okay for a teenager. I was a conscientious student. I didn’t get into a lot of superficial arguments with people. No one bullied me. I don’t think it ever occurred to anyone to try. It would be like bullying water into doing your bidding. Or trying to convince a palm tree to hold a treehouse.

It wasn’t until adulthood that I started to see the pitfalls of some of my patterning. If you are never willing to take a stand on anything…people will (often unknowingly) trample all over you. If they care anything about you, they may take great pains not to take advantage of you…but may suffer from a bucket-load of confusion around what it is you WANT for christ’s sake. Just tell me! Fun fact: repressing anger is also a very effective means by which to invite anxiety and even depression into one’s life.

So…naturally…when I decided I wanted to dig in and get busy growing so I could overcome that whole anxiety/insomnia/depression business, you can imagine the degree of shock and horror that came with the discovery that the best way to become whole would be to invite anger and conflict back into my life.

Say….what? Come again? But…but…what about about all those woo-woo books that talk about the importance of letting anger go? What about all those guru’s who tell us to soften, look outside of our own egos and serve others? Isn’t that still a thing?

These were the arguments I gave to the man I recruited to support me in improving my anxiety and ultimately growing into a more rounded adult.

Interesting stuff. But what,I’m sure you are wondering by now, does all of that have to do with my petty conflict with  my friend?

Well as it happens, my friend and I happen to fall equal distance away from the middle of that whole-person center. I am pretty sure it’s part of why we have remained friends. On some level, we are each hoping the other will rub off on us.

My greatest strengths (in my, admittedly biased point of view) lie in my lack of attachment. My flexibility. My curiosity. My willingness to love without ever wanting the object of my affection to change form in accordance with my so-called preferences. My greatest weaknesses are in my inability to communicate assertively. To be clear about what my wants and my needs are. To build a firm enough structure that others walking in feel confident they understand. It’s all well and good to be a curious and open-minded person. But if almost all of your sentences end in question marks, and almost none of them end in periods…sooner or later that’s going to cause problems.

My friend’s greatest strengths (again, in my very biased opinion) lie in her ability to communicate her attachment. Her ability to make others feel a part of something. Her humor. Her razzle-dazzle. Like a supernova, she emits warmth and provides a center of gravity around which aimless planets like myself can gravitate. Her greatest weakness lies in her struggle to let go. To be vulnerable. To lean into uncertainty. To relinquish control. If I flock to question marks during times of strife, my friend prefers exclamation marks.

So there we were. I hurt her feelings. She responded in a way that hurt mine. Big whoop.

But this time, I didn’t scurry away from my anger. Granted, I didn’t communicate with gusto right away. But I did admit it to myself. I watched as a mushroom cloud of discontent radiated a seriously uncomfortable sensation from my solar plexus all the way to the tippy top of my hair follicles and down to my pinky toenails.

I did NOT like it, mind you. But I did face it.

I was angry. Pissed off. Enojada.

And you know what? That was a perfectly respectable emotional response. And damned if it wasn’t also useful.

It was not just useful as it pertained to how I engaged with my friend. (If you’re curious, in an unusual act of honesty, I did manage to get the words “I’m angry…specifically at you” out in the open). For her part, and to her credit, she seemed to hold the space for my anger with the same level of dedication I am accustomed to providing for her. Honest conversation is almost always a good thing.

As it turns out, I am exceptionally good at lying to myself especially when it comes to anger. I can rationalize away anger faster than  most people can turn off a lightswitch. Angry? I can’t be angry. Angry people aren’t likable. And if I’m not likeable…well that’s not even something I’m going to entertain.

But in chasing the goal of always being likeable, I have been inadvertently leaving myself open to not being taken seriously. It is difficult to respect a person who is unable to respect herself. It’s difficult to value the good opinion of someone who is unable to give a critical one. In chasing likability, I was moving away from authenticity. It was….is…. dishonest.

The more I faced my anger and frustration, the more I saw that it was trying to tell me something. “Look around you,” my anger demanded. “Where are the boundaries YOU have failed to build and communicate effectively? What in all of this don’t you like? What needs to be removed?”

In short – my anger is getting me to ask better questions.

It’s exhilarating to contemplate these questions. It’s also utterly terrifying. Because to answer them will mean going against the grain of years of patterning and habituated people pleasing. It will mean opening myself up to rejection and pain and…yes…even anger. It will mean letting other people down. It will mean showing up.

In other words…it will mean allowing my idea of myself as an eternally calm, collected, and discerning person to die. It will mean allowing my current friendship with my friend (or at the very least… my expression of myself within it) to die. My friend will no longer be able to look at me and see me as she has seen me thus far. I will not be able to look at her and see her as I used to, either. What will come of all that is anyone’s best guess. Perhaps it will mean we will make room for a relationship that is entirely new. Or perhaps it will mean the whole thing will dissolve. That’s growth for you. It’s a constant letting go of the old to make room for what’s next.

So the next time you hear someone talk about “personal growth” like it’s a hot commodity you should put in your online shopping cart…just stop. Understand what it is you are actually entertaining. Because to grow is to turn toward the very aspects of yourself that you have likely spent a lifetime trying to escape. It is to move away from the shallow end of the swimming pool, stand on the edge of the deep end and resolve to dive in head first.

Be advised… there are no lifeguards on duty.