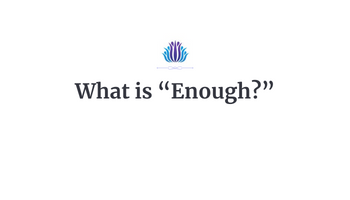 “The opposite of scarcity is not abundance. It is simply enough.” Brene Brown

I was on my way to work the other day…listening to NPR (Yes…I live in the bay area, write a blog about health, wellness, and sensitivity and listen to NPR. I understand this makes me something of a walking, talking, living breathing stereotype. It’s all good. Go ahead and get all the jokes out of your system so we can move forward…)

Anyway…the topic was about teenage girls. It was an interview with Rachel Simmons the author of a recently released book titled: Enough As She Is: How to Help Girls Move Beyond Impossible Standards of Success to Live Healthy, Happy and Fulfilled Lives.

Full disclosure – I haven’t read the book yet. But I downloaded the thing today and fully intend to. Because during just a few moments of listening to Simmons speak, I felt like she was hitting on something vitally important. Mainly…she was speaking to something I believe is a core challenge we all face (men and women alike…even if it might manifest slightly differently depending on the person)…The challenge of knowing when we are, have and/or are doing enough.

To put it simply – I was drawn to Simmons not so much because she was speaking to the specific challenges young women face (although…being a woman, I certainly did pick up on that) but instead because she referenced a song of self doubt so many of us are singing the lyrics to:

Am I thin enough?

What does it mean to have eaten enough food?

When do I know for sure that I have enough in terms of material possessions?

How will I know if I am making enough money?

Am I working hard enough?

Am I eating enough vegetables or drinking enough water?

Am I exercising enough? Did I rack up enough steps on my tracker?

Am I getting enough sleep? Is the quality good enough

Am I spending enough time with my family?

Do I have enough followers on (facebook/Instagram/twitter/snapchat)

Am I contributing enough to society?

Am I politically involved enough?

Am I informed enough

Which really all boil down to the heart of the question we are all asking:

“Enough: Occurring in such quantity, quality or scope as to fully meet the demands, needs or expectations.” – Merriam-Webster Dictionary.

The definition, above, is helpful insomuch as it provides a general idea of what is required to have met the “enough” criteria. Whatever it is you are measuring, it simply needs to meet the “demands, needs or expectations.” It needs to be sufficient… not perfect.

Sufficient for whom? Who gets to decide what the needs, demands and expectations are? Who is equipped and qualified to make that call?

I bring this up in a blog about being a “highly sensitive person” because, so far as I can tell, highly sensitive people appear to be particularly preoccupied by this question. Remember, those with more sensitive nervous systems tend to be acutely aware of when they have fallen short in the eyes of someone in their circle. No one likes conflict, but those who identify as being HSP appear to be physically pained by it. For such a group, you can imagine how easy it might be to fall into the trap of “so long as I please everyone, I will be safe. I will feel connected. I won’t be ousted from the tribe. I will be liked and admired…”

And…it is my personal belief that this is why so many highly sensitive people often (not always…but often) readily hand over the power to decide what constitutes enough to someone outside of themselves. We voluntarily open up cage doors, crawl into our respective cages, and hop onto the staged hamster wheels within. We assign gatekeepers outside of the perimeter of the bars containing us within, and tell them to let us know when we can get off the damn treadmills we are running on.

SHOCKING that we keep spinning our wheels. What incentive does anyone outside of ourselves have to enforce our own self care? PARTICULARLY when our efforts are benefiting those around us? Virtually none.

I’m not saying that our gatekeepers are villains. They aren’t out to get us. Your boss at that new shiny tech job probably isn’t trying to exhaust you and give you insomnia. Your friends don’t want you to feel overwhelmed by the string of invites they leave in your text inbox. Your family members didn’t mean for you to be hurt when they told you to lighten up and be less sensitive. And President so-and-so (Trump today…but insert whatever candidate is grinding your gears on any given year) probably isn’t personally out to make your life miserable. They are just BEING. They are just living. Your desire to seek their approval isn’t necessarily a problem. At least…it’s not a problem for them. They just probably aren’t nearly as invested in your opinion as you have allowed yourself to be in theirs.

So yes…I agree that it is an admirable goal to attain the goldilocks standard of “not too much, not too little…but juuuuuuust enough.” I just think we ought to stop playing victim to other people’s definitions of what that means. Each person needs to discern that for him or herself.

The good news for my fellow HSP is that we are fully equipped to make that call. Highly sensitive people, remember, are typically easily amused. They tend to spend a fair amount of time self-reflecting. They, therefore, tend to know themselves pretty darn well. They know their strengths and shortcomings. They are uniquely qualified to determine what “enough” work or “enough” food or “enough” rest should look like for themselves.

So…what I would like to personally invite us all to do is start getting really clear on what our personal definition of enough is and (more importantly) start enforcing it.

Because when you truly are able to integrate the notion that you have, do and ARE enough – THAT is the good life.