What Do You Stand FOR? 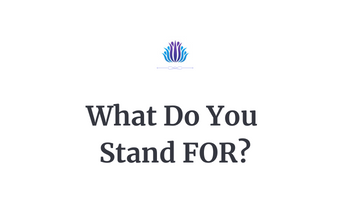 I don’t know about you…but I’m getting a bit of “Anti” fatigue.

Like a bunch of toddlers, we seem to be exceptionally adept at saying “no!” with a satisfyingly pouty face to those things we detest and want no part of. And it’s leaking into nearly every category of our lives. It’s almost like we have taken the concept of “commandments” and extended it into the way we see the world.

When we talk about nutrition, we speak (primarily) about foods you need to avoid. Don’t eat sugar, drink soda, or eat any processed foods. Though shalt not eat junk. We do the same thing with the concept of relaxation. Want to relax? Well, stop watching television, stop reading the news, and avoid social media. Thou shalt not indulge in useless endeavors. When we talk about our relationships, we lay out rules for things we cannot do. We cannot have sex with other people. We cannot say the wrong things, politically. And…speaking of politics…for God’s sake (wait…that’s right…we aren’t supposed to talk about him. Or her…whatever…) for the sake of whatever higher power you deem worthy….don’t you DARE root for the wrong team. THAT would give you away as a villain. In short…thou shalt not do anything to suggest you are anything other than unequivocally on MY side.

Fun fact: shaming people doesn’t get them to change their behavior.

As satisfying as it might feel to raise hell and sing songs of all that we are against…and as happy as we might be to spit on products, ideas and people we dislike…I have some unfortunate news. It doesn’t work. Researcher Brene Brown, PhD. speaks to this, beautifully in a number of her best selling books. Two lines I think are most relevant for the purpose of this article are:

Let’s start with the first one. Don’t try and win over the haters; you are not a jackass whisperer. By trade, I am a life coach and a health educator. I get paid to help people make changes in their lives. I have learned (albeit the hard way, mind you) that I have no business trying to “convert” people to my point of view.

Here is a perfect example. I was on the Covid Hotline at the hospital where I work. A man called and had some questions. He then proceeded to insist that the entire Covid-19 pandemic was a complete hoax. He offered to pay me 2 million dollars if I could provide a photograph of the virus (a sum I am reasonably certain he would not have been able to provide should I have been successful…but I digress).

What do you think I did? Do you think I argued with him? Do you think I threw a fit and explained that he was an idiot? Did I, perhaps, insist that he look at…I don’t know….ANY scholarly article with an image capturing what a Covid virus looks like?

I am not a jackass whisperer.

I just got off the phone.

Now let’s move on to number 2; you cannot shame or belittle people into changing behavior. THIS one I think is exceptionally important. I say that because it is THIS one we seem to be banging our head against (all the while surprised by the ferocious headache we develop in doing so). We are SO sure that if we are sarcastic enough.…perhaps the other side will see the error of their ways. If we protest against the thing we are against with enough viciousness…all will be forced to heel.

Damnit…don’t you know cigarettes are BAD for you? (Yes…they know. Quitting is hard)

What is WRONG with you? You KNOW you have to stop eating sugar. Why do you keep doing it? (Because sugar is delicious and addictive. Quitting is hard).

Don’t you KNOW that global climate change is real? You need to stop driving gas guzzling cars (yes…because yelling at people will totally get them to trade in their SUV’s)

Listen…I’m a human being. I have an ego like everyone else. I have opinions and beliefs that I am pretty attached to…just like everyone else. But I am not unwilling to hear out a person who disagrees with me. If anything, I rather enjoy it. SO LONG AS…it is coming from a place of “pro” rather than “anti.”

I don’t want to hear about all the foods I should avoid. Tell me what to EAT. When I speak with people about nutrition, I don’t rag on them about their so-called poor food choices. Well…maybe I do to my friends. But they are stuck with me. So whatever. But when it comes to people I actually work with…I don’t just give them a list of foods they don’t get to eat anymore. Instead, I tell them what foods will nourish the body. Eating vegetables, for example, is pretty much (with very rare exception) always a good idea. Drinking plenty of water…so long as that water is potable…is almost always wise. I am not “anti-sugar” or “anti-junk food” ….I am PRO feeling good. I don’t just want to talk about foods you should kick out of your diet. I want to talk about the meals you have eaten that were satisfying, and left you having more energy when you left the table than you had before you sat down to eat.

In the same way, I don’t want to hear any more about things you are politically against. I am not interested in whether you are anti-trump, anti-racism, anti-gay, anti-immigration or anti…insert whatever you deem appropriate here. If you want my attention, you will start with what you stand FOR.

If you dislike Trump? Fine. I get it. Trust me…I am no fan of the guy and I am certainly not impressed by what his administration has accomplished. But that does not mean he is evil or that those who support him are evil. I have met a number of people who voted for him in 2016 and some who plan to vote for him this November. They are good people. Most of them say things like “Yeah….I’m not crazy about him overall. But he has done this one thing that means something to me….” He pushes against China. He supports gun rights. He let this guy or that guy out of prison. Are these people evil? No. They go to work every day. They work hard. They are kind to the people around them. They are kind to those in their family. I disagree with them. And also…every time I speak with them, I learn something new. I see the world from a slightly different point of view.

If you are avidly against racism? Believe me….I am 100% with you. But you need to do better than merely tell me you are anti-racist. Tell me what that means…and tell me what your vision of a world free from racism looks like. I have spoken to people who champion slogans like “defund the police!” Are these people anarchists? Do they actually think all police officers are incompetent and/or evil? Honestly? No. Most of them have very reasonable things to say about the kind of changes they want to see. Spend some time with them and you will hear many of them say they want to divert some funds away from the police force and funnel that money into programs that hire mental health professionals who are better equipped to de-escalate situations that may not warrant a police officer (or…if those situations do warrant the police being present…it might be a wise idea to have more than ONLY officers present.) These are individuals you will often hear say we need far better accountability measures for police officers. Allowing all investigations to be internal is hardly sufficient. None of that seems unreasonable to me. These people, too, work hard. They are kind to those around them. They are kind to those in their family.

So what am I FOR?

When it comes to personal well-being? I am enthusiastically in favor of eating nourishing food, regularly exercising, developing a spiritual practice, and taking time to recharge. I am for healthy relationships. I am a champion of having a creative outlet, a regular practice in personal growth, and time for rest and rejuvenation. This means I spend the bulk of my time encouraging others to live in accordance with their values and schedule their priorities rather than merely prioritizing their schedules.

When it comes to our personal relationships? I am in favor of thinking critically and challenging our own assumptions. I am for giving people the benefit of the doubt and assuming best intentions. I am for healthy boundaries and effective communication. This means when I speak with others, I am perpetually asking people to get curious about the other person’s point of view.

When it comes to our community? I am for having common-sense practices and rituals that leave the greatest number of people with the least amount of suffering. I am for common courtesy. I’m a big fan of turning on our blinkers before turning into a lane, and an even bigger fan of generosity. In other words, I am a champion for seeing a community as being greater than the sum of all its parts.

And when it comes to politics? I am for honest conversation and free speech. I am for equality of opportunity. I am a pretty big fan of our constitution and would like to see it honored. I am for looking critically at the way we do things and perpetually striving to do a better job. I am for experimentation, trial and error. I am for looking at what we are doing well and expanding on that, and looking critically at what we are doing poorly and working to improve upon it.

But maybe if we started with where we agree and take one step at a time…we might…MIGHT be able to make real progress and maintain our dignity at the same time.

What about you? What do YOU stand for?