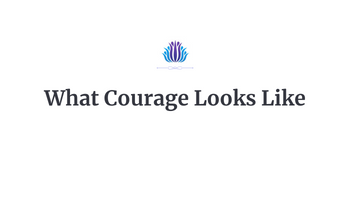 I’ve been thinking a lot, lately, about courage.

As a kid, I was brought up thinking courage looked like young strapping men fighting off evil sorcerers to win the hearts of fair maidens.

For there to be courage, there must also be an evil-doer. The golden hero is the antithesis of all that ugliness. His bold actions and the triumph that follows are the two required ingredients for courage. I mean…right?

The problem with this point of view is that it sets quiet young women like myself apart from courage. It keeps courage out of reach. If being courageous means one must  be flashy, loud and bold…well that’s not really my style, so I must not have the stuff of courage. If  being courageous means vanquishing a villain…well I don’t much like unnecessary conflict and favor deliberate communication where both parties get to keep their dignity over and above winning in a bloodthirsty battle of wills. So again…courage must not be in the cards for me.

But when I really take a look at those I admire…those whom I find myself reflexively saying “oh yeah…that’s courage all right” ….I find that they look far different from the cartoon heroes I grew up with.

In Teddy Roosevelt’s famous speech “The Man in the Arena” – he cries out to his audience that it is not the critic who is slinging sarcastic jibes from the sidelines who counts. Rather, the credit goes to the man IN THE ARENA. The man who is wounded and weary from effort. THAT is the  man who we must admire. For win or lose, THAT is the man who is in the game.

Courage is the willingness to get into the game… win or lose.

Given that notion, courage can come in as many forms as arenas we can build in our lives.

There is no one-size-fits-all version of courage. Was General Patton courageous for his aid in one of the largest world wars in history? Sure. But so, too, was Eleanor Roosevelt for her efforts at home. Eleanor…who was quiet, resolved, and loved the company of solitude was willing to advocate for those disadvantaged at home – even if it meant she had to do it in front of a camera. Was Martin Luther King Jr. Courageous? Absolutely. He risked (and ultimately sacrificed) his life to raise the bar of America’s character. But so, too, was Rosa Parks. The unassuming woman who conscientiously objected, in her quiet way, to giving up her seat on a bus. An act that incited mass boycotts around the country shortly thereafter.

Courage, then, isn’t necessarily about attracting a lot of attention. It’s about living in a way that resembles yourself in its most authentic fashion even (and perhaps ESPECIALLY) when it’s hard.

To be courageous is to be able to answer questions like…

And more importantly… upon answering those questions, courage demands that we step up and work on building a life based on how we respond. Tenaciously. Relentlessly. Unapologetically.

I don’t know, yet, what my particular brand of courage looks like. But I can tell you that I come alive during rich conversations about purpose and life and experience. I can tell you that I light up when dancing to a particularly juicy song with a hairbrush for a microphone and nothing but my instincts to guide me in choreography. Where am I most alive? When I’m alone, writing, running, reading, reflecting. I’m most alive when I’m in nature.

I know that the kind of company I want to keep is that which includes people who are unwilling to settle for an emotionally bankrupt life just to “keep up with the Jones’s” and look good to outsiders. The people I keep company with are those who are fully alive, themselves. They know the value of hard work, but they also know the value of letting go. Of play. My people love fiercely. Unselfconsciously.

I know, that for my life, I must have connection with other humans that feels real. Not manufactured. I must have purposeful work…work I feel is a contribution to others. I must have time alone, and I must have the ability to operate independently.

I also know that I cannot stand materialism for its own sake. I cannot stand a lack of integrity. I cannot stand being in the presence of someone who would tear others down so as to lift herself up. I cannot stand the kind of philosophy that says we should burry our heads in the sand and just keep pretending everything is fine if it isn’t. I also can’t stand it when one is incapable of being grateful for what is right in front of them because they are too busy chasing what they think they should want more.

But here is the real question. Can I LIVE that way? Am I willing to sacrifice the comforts of materialism in order to live as honestly as I claim I need to?

Do I, in other words, have the courage to live in my own image?

What about you? What would you say makes you come alive? What are your values? What company would you like to keep?