The Value of Taking Up Space 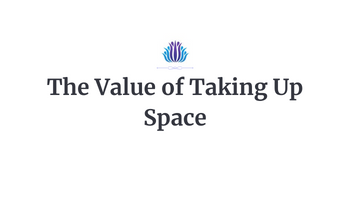 I have a secret…

I have a superpower (she says in a whisper).

I am a walking, talking, living, breathing…chameleon.

Walk me into a space…ANY space…and I will easily blend into the surroundings. I can quickly adapt my speech pattern, my body language, my temperament, and my tone to the pace of any group of people around me. I will not offend. I will not ruffle. I will not make waves. I will not take up space.

In fact, you will hardly notice I’m there.

But I’m not the only one

I used to think this made me kinda special. I mean…who else can blend into their environment like that? Outside of comic book characters, of course.

As it turns out…most all highly sensitive people have this “superpower.” (Dang! And here I thought I was the only one…)

Highly sensitive people appreciate harmony. Conflict, by contrast, is avoided with a fair amount of vigilance. Why? Well…I don’t know if you know this about HSP’s…but they don’t like having a lot of stimulation all at once. And conflict is nothing if not stimulating.

HSP’s are also excellent people-watchers as a rule. They pay attention. To EVERYTHING.

So what happens when you get a person who both dislikes conflict AND pays attention to their environment?

You get a chameleon.

Why is this a problem worth talking about?

But I’m starting to shift my thinking about this.

A couple of weeks ago, I went through a training that cleared me to perform a bone density scan. There were a few of us getting trained, so we decided to use each other as lab rats to make sure we knew what we were doing.

Now…it’s important to note that I’m used to stellar test results. I’m relatively young. I am active. I eat well. I meditate. I do all the woo-woo things. Cholesterol scores? Obnoxiously good. Blood sugar? Fabulous. Fat percentage? Right on point. You name it and I’ve covered my bases on it.

So you can imagine my surprise when my scan came back saying that my score is normal…ish.

“Wait.” I said “Does this mean I have low bone density?” I looked at the score with a certain amount of confusion. “But…But…I’m only 33!”

As it turns out, having a solid score in the bone density category is frequently correlated with having a slightly higher BMI. You see…if you want to have dense bones, you have to do a lot of weight bearing exercise. And if your body is relatively light, you’re probably not “training” your bones (so to speak).

My score was still in the normal range, but it was clearly heading in a not-so-good trajectory. I was right on the border between low to moderate risk. Which is fine. But again…I’m 33.

“What should I do to get this score up?” I asked.

It seemed like such a perfect metaphor. I am so good at treading lightly that even gravity isn’t paying me much notice. I am, quite literally, so focused on not disturbing my environment that I am remaining ethereal and light all the way down to my bones.

This didn’t just pop up in a bone scan…

I’m not trying to say that HSP’s are all struggling with bone density. I promise. I’m not that literal. I merely bring it up because, at the time, it caught my attention. I stored it away as simply “interesting.” As it turns out, there is a certain amount of value in being a more dense and substantial human being. Physically, that is. The prescription I was given at the time was to go home and start building muscle. Get stronger. Go make more of myself so that I would lower my risk of breaking.

Later on, I was in the middle of a yoga therapy session when we started talking about meditation. We had tried, as an experiment, to meditate on space. Meditate on the void. On the No-Self. I should tell you that it was probably one of my most favorite meditation practices. Like…ever. I could disappear. There was no wanting. No aching. There was no self to want. No self to hurt. (You can imagine why an HSP would be totally into letting go of a Self).

When I relayed my experience, the therapist I work with said “hmmm…okay that’s interesting. Now I want you to try something else. I want you to meditate on TAKING UP space. Rather than moving away from your “self” try going further into your self. Start feeling out what it’s like to be in the space as YOU.”

“Really?” I asked. “But…but…isn’t that just going back into the ego?” His his response was something like…

“Listen…we all fall on a kind of spectrum with this stuff. Some folks are TOO wrapped up in their ego. Their story. Their job is to start letting go of it. To get outside of themselves. To access that part of ourselves that is buried under all that dressing and go directly to the witness (or whatever you want to call it). But other people don’t so much need to check their ego. It’s more like they need to check their ego…to make sure it’s still there.”

He went on to say that in my case, it might be more fruitful to sink more deeply into my Self rather than continue toward letting it evaporate.

If this is all sounding a little too woo-woo for you, another way of phrasing this is quite simply that he was trying to encourage me to be more assertive. More substantial. He was encouraging me to get more comfortable advocating for my own needs. You could say he was encouraging me to better identify the self within me that had needs in the first place (rather than encouraging me to move toward letting go of my needs – since I’m apparently pretty good at doing that already).

I’m not saying that being a chameleon is necessarily a bad thing. But…

It’s lovely to have the ability to blend into an environment. And paying close attention to the needs of others is hardly a trait that should be labeled “villainous.” BUT…it can become a problem when that tool starts to use you.

Examples of ways this can become a problem might include:

So…I suppose it always comes back to discernment.

Highly sensitive people tend to be terrific at morphing into whatever version of themselves that is needed at any given time. It’s part of why they tend to be viewed as affable. Easy to get along with. Adaptable. There isn’t anything necessarily wrong with that. It can be a terrific asset. It only becomes a problem when it is a mindless pattern.

There are times in life when the best thing we can do is step aside and get out of the way. There are times when blending in is the best possible decision. But there are also times when it’s appropriate (necessary, even) to stand firm, take up some space and say “YES. I EXIST. I HAVE VALUE.”

The trick is to know when each one is appropriate.

If you’re an HSP…how do you navigate this? How do you know if it’s appropriate to assert yourself and express your needs…and how do you know when it’s better to stand back?