The Benefits of Hopelessness? 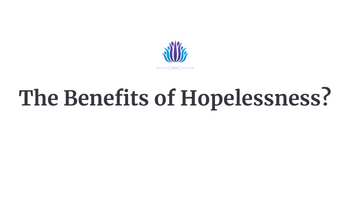 I’m feeling extremely uncomfortable. My chest aches. My stomach is twisted in knots. My back muscles are taught. My jaw is stiff from all the clenching.

If I were to name the culprit for all the unease, I guess I would call it fear. But the worst part is I’m not entirely clear about it. I mean…yes…It’s fear…but is it reasonable fear? I have absolutely no idea. It feels like I decided to go camping in the woods by myself (because – why not? nature is awesome, right?)  But in the middle of the night, I heard a noise and watched as a large shadow crept along the outskirts of my make-shift solitary camp. Is it a bear? Is it a snake? Is it a raccoon? Or was it just the wind? I dunno. All I know is that it’s dark and there was  noise and now I can’t move because I’m staring fixedly at the same spot wondering when and if it will move again.

In truth, I could actually go into some detail about what the cause of all the discomfort is. I could even make a compelling case for victimhood. But honestly – I’m not sure if that is useful here. That would be a bit like asking “well why were you in the woods? Why did you decide to go by yourself? What lead you to the decision of heading into these particular woods? Why did you choose this particular spot to camp? Did you check, beforehand, to see if this section of the woods is bear territory?

Such questions would only make me reply: “What difference does it make? I’m here, now, and there’s a f***ing BEAR there!”  (I think…)

So suffice it to say that I had wants and needs and expectations (the culprit in most people’s unhappiness) and they didn’t get met. I’m afraid they never will. And now I’m scared of what that will mean for my future.

Usually when I feel this particular flavor of fear, movement helps. Something about the rhythm and the breathing helps ease the suffering. It takes the edge off. As Josh from the Mininmalists says – E-MOTIONS can move more fluidly when I am, in fact, IN MOTION.

Maybe the equivalent in this case would be me getting up and slowly walking away from the camp. Who cares what caused the noise? LEAVE.

But I’ve spent a lifetime getting up and retreating from internal noises that bump me awake in the night. And in doing so, my imagination has been given license to go wild. Rather than facing what’s in front of me, determining what it is, and taking deliberate and discerning action,  I preemptively run. And as I do, I imagine that whatever it was, it must have been a truly horrific beast. Whew! I really saved myself from death! The story I weave about what MIGHT have happened if I stayed in place gets only increasingly heroic the farther I get away from the scene of the alleged near-crime.

So I now I’m sitting still instead. Staring. Waiting. Observing. Wondering. No one to keep me company except that maybe-beast and my sheer terror of what will happen next.

But for the first time in my life, I’m not trying to wrench droplets of hope from out of the situation. I’m just letting it be hopeless.

I always thought of that feeling as a sort of enemy. If there is no hope, what’s the point? If a person really and truly feels hopeless – surely the next concern is suicide, yes? We should hurry up and get this girl some help!

Pema Chodron writes: “As long as we are addicted to hope, we feel we can tone our experience down or liven it up or change it somehow, and we continue to suffer a lot.”

She goes on to say “If we are willing to give up hope that insecurity and pain can be exterminated, then we can have the courage to relax into the groundlessness of our situation.”

Which is about the kindest way I’ve ever heard someone say “Life sucks sometimes. Deal with it.”

And by “deal with it” she doesn’t mean “fix it.” She means we simply need to accept it at face value for what it is…life happening. If our job isn’t going well – let go of hope that it will change. Embrace that it might need to end. If your relationship isn’t working and you’re feeling like there is no hope – maybe there isn’t. That doesn’t mean you failed. It means it died. All things do.

I’m not getting the sense that Pema Chodron is operating from a defeat-mentality. It’s not like she’s saying “meh…why bother trying?” I think, instead, she is saying “why worry? It’s not entirely up to you.”

This is perhaps the most profound example of surrender one could possibly attain.

And maybe that’s the benefit of hopelessness. Maybe it takes feeling hopeless to truly surrender one’s ego. To let go. It’s hard to surrender to the moment when we are grasping onto hope that things will get better “if only…”

I’m still afraid. But maybe that’s okay. I’m tired of outrunning fear. Maybe I’ll just sit with it for a while. I’ll stare fixedly into the night and wait to see what the morning brings. Because if I can learn to do that, maybe I’ll learn what courage looks like.

Or maybe I’ll be someone else’s dinner. Either way…