Letting Go: Why Highly Sensitive People Find it So Difficult 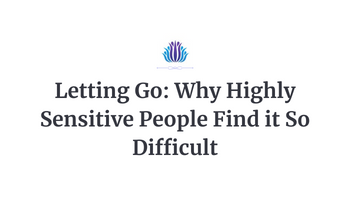 So far as I can tell, human beings really like having a sense of control in their lives. It’s why so many of us develop routines and rituals. It’s why we go out in the world searching for “the one” (when what we really mean is someone who will promise me his forever.) It’s why we like jobs that offer “security” (ie benefits or good pay).

The irony is that almost NO variable in our lives is actually fixed. To the extent any variable is fixed, the algorithm we are using on the whole has a shelf-life. (In other words, we are all going to die. THAT is the only real certainty. Even taxes, by comparison, are negotiable).

Given that everything is temporary and there really is nothing much we can do to stop change, it makes sense that the wisest of us all seem to have this one thing in common: the ability to let go.

Show me a man or woman who is at peace with himself or herself, and I can almost guarantee you that he or she will have learned the art of letting go. These folks seem to know, instinctively, when its appropriate to grab hold of the reigns to steer life at will and when to let go of the reigns…perhaps even going so far as to jump off the carriage altogether.

How do highly sensitive people feel about this whole letting go thing?

Spoiler alert…I have not figured out that particular skill. And from my observations of my fellow HSP…I find that most of us seem to find striking that balance a special kind of puzzle.

Why? With all our spidey-senses and willingness to lean into the feels…you would think we would be excellent candidates for going with the flow of life and surrendering to the universe and all that other woo-woo crap. What gives?

My guess is that while we might come across as being bendy and accommodating to others (especially to those we love), the way we are wired doesn’t necessarily make us as pliable when it comes to navigating life on the whole.

DOES – The four primary characteristics of being an HSP

Elaine Aron organized the information she collected about those who have sensory processing sensitivity into four trademark characteristics which include:

D – Depth of processing. Highly sensitive people process the crap out of ideas, experiences, sensory information…you name it. Every sentence you utter will be examined (often unconsciously) drop by drop. Everything from the tone of voice you used to deliver the information to the choice of diction will be scrutinized.

E – Emotional sensitivity. Highly sensitive people have a wide and deep emotional landscape. They are likely to report feeling tremendous joy from something as simple as a picture of a puppy, and they are just as likely to report melancholy when faced with a homeless man on the street. This doesn’t make us all tender-hearted people. It just makes us more easily affected by our emotions. It’s not that other people don’t feel the same things HSP do. It’s a matter of intensity.

S – Sensory sensitivity. This simply means highly sensitive people appear to have keener sensors. Most people may or may not hear the buzzing of a refrigerator. An HSP most certainly will. On the flipside, highly sensitive people, due to their more nuanced senses, are often very good artists for this very reason. They are more likely to pick up a greater array of colors in a painting, and are also more likely to be able to describe a wider nuance of emotions when writing a story.

Why this leads to a tendency to hold on…

When you consider the qualities that make up a highly sensitive person, the fact that they may struggle to let go becomes a bit easier to understand. Without even necessarily trying to, highly sensitive people are more likely to pick up on a lot of data from their environment AND process each data point with a great deal of care.

This is part of the reason so many highly sensitive people are frequently told they seem very “intuitive.” Some are even mistaken for psychics. They aren’t. Or maybe they are, I don’t know…but it seems to me the more likely explanation is that their nervous systems are simply wired in such a way as to quickly pick up information and, without even trying especially hard, start to put together patterns.

This is why highly sensitive people often struggle so much in romantic relationships in particular. They can see, well in advance, all the potentially toxic patterns of a given relationship…thus leading your average HSP to start building in escape routes “just in case” far more often than the average person (rather than simply letting go and seeing where things go).

Highly sensitive people are also more attuned to their bodies. They notice symptoms on a much more subtle level far before the average person might. The upside to this is that they are more likely to seek out help sooner, and often have a higher survival rate as a result. BUT – when the best course of action is to relax, THAT is often a tall order. The highly sensitive nervous system is built to be vigilant. The system is wired to pay attention. So we can end up aggravating the very condition we are trying to assuage simply by thinking about how to fix it too much.

In other words…the downside to being a highly sensitive person is that we frequently spend more of our time thinking about life than we do living it.

Years ago, I was in a relationship that, on the outside, looked lovely. It was clear he cared about me. He wanted to build a life with me. So why didn’t I want to settle in and become Mrs. happy? I spent months and months agonizing about it. What was wrong with me? Why wasn’t it working? What could I do to FIX it? What could I do to fix me?

I eventually figured out the elements in the relationship that were missing and was therefore able to develop a rational…maybe even justifiable…set of reasons to leave. But here is a question to consider. Why did I need to have a justifiable reason? Why wasn’t it enough that I simply wasn’t happy? Why couldn’t I just go with my gut? Well…as I said in a previous article Decisions: Why the Struggle is So Real for Highly Sensitive People hsp’s don’t tend to make these kinds of choices lightly. We are back at that depth of processing trait. We like to be as sure as we can before taking any sort of leap into unknown territory.

So what can be done about it? How can Highly Sensitive People learn to let go?

I’ve wrestled with this for as long as I can remember. How can I learn to let go? And I’ve come to a controversial conclusion. Maybe we can’t.

Hang in there with me…because I’m not saying this to dash all your hopes for a potentially more satisfying life. When I say “maybe we can’t” what I mean is…maybe the thing we most need to let go of is our struggle with trying to let go.

More recently, I struggled (and I do mean struggled) with a very difficult decision. I spent months weighing and measuring and considering and pondering. My heart wanted (still wants) one thing. But my head couldn’t figure out a way to meet my wants without sacrificing my needs. I found myself playing tug of war with the kind of ferocity two wolves might play with the last few scraps of meat on a fresh carcass. Why couldn’t I just make a decision and be done with it? Or at the very least…why couldn’t I just stop thinking about it and go with the flow? See where things went? Why couldn’t I just LET. IT. GO?!?

The short answer is simply this: that’s not me. I’m never going to be the one who carelessly leaves a relationship or a job or a project or a friend. I won’t ever be the one who simply lets loose and allows her anger to  bubble up and say whatever is in my brain at the time to release steam and give myself some momentary relief at another person’s expense. I’m not the girl who shrugs and says “meh…whatever!” I don’t mean that I can’t laugh (I do) or that I don’t know how to play (I love silliness!) I just mean that it’s not in my nature to be utterly without care.

Maybe that is the real lesson of letting go. I am letting go of my attachment to letting go. I am relaxing into the way I operate and rather than fighting it or shaming myself for being agonizingly cautious with every new move…I’m embracing it as a perfectly respectable way to operate in the world.

What about you? How easy is it for you to relax into a situation and let go of needing to overthink it? Have you figured out a strategy to relax into things? Or are you like me…learning to be at ease with your lack of ease?