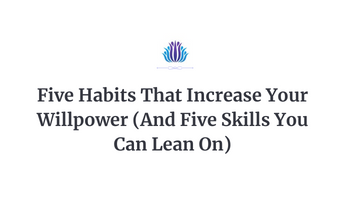 What is the most powerful word in the English Dictionary? No.

If you want to create a healthy body – most of the time it boils down to saying “no” to sweets, treats and alcohol.

If you want to create wealth, your greatest task is to learn how to say “no” to purchases that you don’t actually need.

What about peace of mind? It distills down to your capacity to say “no” to events and commitments when you really need some time to yourself.

Because in the end…saying “no” to these things is really about saying “yes” to yourself. As a colleague of mine once said – “If you never learn how to say NO, your YES means nothing.”

The problem is that saying “no” requires a certain level of discipline. We are constantly bombarded with temptation offered by marketing specialists who are very good at getting a yes.

So how do we cultivate discipline? Basically, it boils down to a combination of both Will and Skill.

Question: Would you rather eat a treat right now? Or would you prefer to wait for 20 minutes and eat two? That was the question posed to children nearly 40 years ago. Those who answered the latter were tracked over time. They tended to have better relationships, more fulfilling careers, and greater wealth. Why? Because they showed, at an early age, an ability to delay gratification. Otherwise known as willpower.

But…does that mean we our capacity for success in life is predetermined? Not really. According to a number of health researchers, including health psychologist Kellly McGonigal, we can learn how to cultivate more willpower with these habits:

Want more information? Take a look at Kellly McGonigal’s interview about her book: The Willpower Instinct.

But it’s not just about cultivating more willpower. Since willpower is a bit like a muscle (which means it can get fatigued) – it’s also about learning how not to overtax your willpower muscle. You don’t do that with willpower. You do it with SKILLpower.

In their book Living Smart: Five Essential Skills to Change Your Health Habits Forever, Sherri Pruitt and Joshua Kaplow managed to take a mass of research on how successful people sustain challenging behavior changes (changes that lead to greater health, wealth, and overall success) and distill it into five skills.

S – Set a Goal:  Set a specific, measurable, observable goal. In other words…don’t say “I am going to spend less money this month. Don’t say “I’m going to lose two pounds this week.” Say, instead, “I am going to make it a goal to NOT buy coffee out in restaurants and only drink it from home.” Or “I am going to set a goal to exercise 20  minutes at least 3 days during the week. Specific, actionable goals are more likely to be successful because you know when you have achieved it. Vague goals like ” I will eat less” don’t work. Eat less? Less than what? Less than whom? So to set a goal correctly, make sure it passes this test:

M- Monitor Your Progress. Whether you want to save money or lose weight, the power of monitoring your progress along the way is HUGE. This is why pedometers and movement trackers have become so powerful. It gives you an ability to see how you are progressing. Paul Smalera, in his article The Data Diet illustrated this beautifully by showing how he was able to lose 60 pounds by tracking his weight more vigilantly.

A – Arrange Your World. If you decided you wanted to make a point not to drink coffee out…it’s probably important to be sure that you have coffee beans at home to be able to roast. If you don’t have any at home…now you’re just without coffee altogether. And that’s not good for anyone. If you want to start an exercise program…make sure you have your fitness clothes out and ready to go. You don’t want to be looking for them when you are already pressed for time.

T – Treat Yourself. That’s right…if you want to make a habit stick, you have to have built-in rewards for your behavior. So every time you choose NOT to have coffee, what can you gift yourself with instead? If you are making a point not to spend as much money – what are rewards that you can think of that don’t require a large expense of cash? A walk outside? A ten minute break? Some time on your favorite app? A conversation with a friend? As Charles Duhigg in his book: The Power of Habit reports…if you want to change your behavior, determine the cue for your current behavior. Determine what action you’re taking. Then determine what rewards you gleam from it. For example, if you are currently going out for coffee every day, maybe the cue is your 10am break. The action is coffee at the shop. The reward is a walk outside, a break from your office, and some time chatting with the folks at the shop. How can you gleam some of the same rewards (connection with others, a break from work, a walk) without the coffee?

Conclusion: Basically this boils down to two things. First – if you want to make a change in your behavior, it will take a bit of willpower. If you feel like you have none there are strategies you can utilize to cultivate more. Just like a savings account, you can learn how to deposit more reserves. BUT – just as with a savings account – one of the best ways you can assure you keep what willpower you already have intact is to learn how not to tax it all the time by learning to use SMART skills.