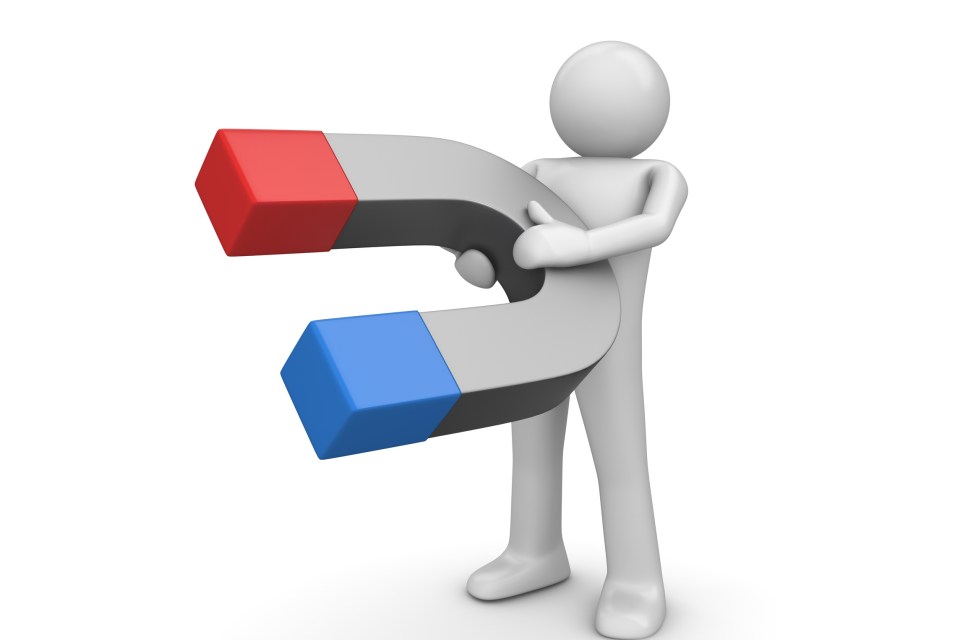 At any rate…I would spread them on the floor and I’d be equal parts transfixed and confounded as I rolled one toward another. Depending on the angle, the two marbles that connected would either sync up and bond, or refuse to go anywhere near one another…sending each other moving involuntarily in two separate directions without ever having come into physical contact with each other.

What can I say? This was before smartphones. I think it was even before “snake.”

As I watched the marbles move along on the floor, I couldn’t help but wonder: what was it that would connect these two marbles and send these other two scurrying away from each other? They were all magnets, weren’t they? Why wouldn’t they all just want to mesh?

Well…now…As an adult, I find myself noticing some similar dynamics occurring in nearly every facet of my life. And I’m as intrigued by the whole thing now as the child version of me was intrigued by those marbles.

Here is an example of what I mean:

There are people I meet on a daily basis that I feel an immediate affinity with. A gentleman walked into my office, today, needing help with his online account. I couldn’t explain why, but as soon as I locked eyes with him, I knew…I mean I KNEW I would like him. The conversation was easy. Smooth. He spoke about his family and his occupation while I drummed up his account and we went about sherlocking the mystery of his locked online profile. Once we figured out the solution, he politely thanked me. And I thought to myself “what a delightful human!” It wasn’t a sexual connection. That’s not what I  mean by attraction. But it was simply a kind of meshing. If I had been at a cocktail party, I probably would have flocked right to him for no other reason than he just had that certain something.

Obviously, not all exchanges go this way. Just like the marbles of my childhood that would force one another to separate corners…I have engaged in conversation with people only to find that I am quite obviously rubbing them the wrong way. Or there are instances when they, through no fault of their own, are rubbing ME the wrong way. We remain polite to one another. But it’s easy to see that we are both forcing it. We tolerate one another waiting for the first opportunity to separate. We know, almost on instinct, that there is a forced bubble around each of us that will allow neither of us to get any closer than a superficial how-do-you-do.

And of course…this happens in the realm of romance. There are people I have met and felt an immediate sense of connection with. I know it from the non-forced way with which we sync up and bond. I don’t necessarily mean that it’s fireworks and rainbows. I just mean that there is a sense of “hey…I know you!” Even though I…well I don’t literally know anything about him. There are also people I have met who seem utterly foreign to me. Every gesture feels forced and every fiber of my being seems to scream “ugh…get AWAY from me!”

The whole thing gets even MORE interesting when you add in the fact that some people are attracted to me, when I really couldn’t be less interested. Then there are people I am drawn to, and who I know really just are not that into me. I don’t remember there being a marble equivalent for that. I don’t remember seeing any marbles, for example, that chased other disinterested marbles across the floor. The marbles get that “no means no” apparently.

What is going on?

There are plenty of scientists who speak on these subjects and try to persuade me that they know what they are talking about. It’s pheromones! We are sniffing each other out. Or….no! Wait! It’s our upbringing. We sync with those who remind us of the people we spent the most time with as infants and children. Or maybe its both? Neither?

I bring this up because I think its an especially complex problem for highly sensitive people.

On the one hand, because our nervous systems are wired to pick up on nuances in our environment, you would think we would be primed to detect, pretty efficiently, when someone is drawn to us, and when we are drawn to others.

But on the other hand, because we tend to spend a long time processing information, and we are conscientious as a rule, we tend to second…third…and fourth guess those initial impulses.

Sure, I was attracted to that guy and I think he is into me. But am I attracted to him for the right reasons? Maybe my attraction isn’t a good thing. I mean…a young girl who is abused is often attracted to men who abuse them. Men who are abused are often attracted to submissive women. It’s not like their souls are trying to connect and create a whole. It’s more like their unconscious and primal brains are trying to recreate the same conflicts they know from childhood. They are self-fulfilling a prophesy set in motion by patterns of behavior their parents put in place before them.

I wasn’t abused as a child…but is it possible that my attraction to (insert man here) is not really about what’s good for me but about what I’m accustomed to? Or maybe I can go with the idea that I am attracted to people who embody traits that are underdeveloped in myself. That’s definitely one of my favorites. When I was a neurotic high school student, I dated a guy who was honest-to-God called “party boy” as a nick name. Perhaps I was trying to integrate some of his “DGAF” attitude in myself? Then I dated a gentleman (and truly, he was a gentleman) who was basically Spock. Maybe my inner emotional roller-coaster ride of a being was seeking to pull in some of his soft-natured and unflappable rationality. And of course, more recently, I dated a man who was all fire and guns. A man who loved debate for debates own sake. ME. Me who would happily walk over hot stones before starting unnecessary conflict…Me who craved harmony to the point of it being a full blown fault… flocked toward a man who thrived on conflict. In his mind, friction was the catalyst for growth. Perhaps some part of me understood that there are times in life where conflict is necessary, even if uncomfortable. Hmmmm. Maybe we are getting somewhere…

Oh but wait! Don’t get too comfortable. Research has shown that smell can contribute to attraction. Or…at least it can contribute to a woman’s attraction to a man Apparently they smell out men who have the correct genes that would produce a healthy offspring. That is…unless the woman in question is on birth control. Than its all a crapshoot again.

Do you see what I mean, by the way, about this being so challenging for highly sensitive people? Who else but a highly sensitive, neurotic, overly reflective person would ponder this question with quite so much sickening ferocity?

I don’t really have answers. (Shocking…do I ever?) BUT I do have some interesting data that I’ve collected after 32 years of interacting with people.

First – my initial impressions are helpful, but not universally reliable. On some level, I do think I am walking around trying not to take up too much space. That kind of strategy is fine…but it comes with the underlying assumption that most people don’t want me in their space. That might be true. But it’s not always true.

Second – while the first few moments aren’t always telling…the first full blown conversation is. So far, if I have gotten to spend as much as an hour with a person, the things I think might be liabilities for our relationship (romantic or platonic) DO end up turning into SERIOUS liabilities later. So maybe that highly sensitive little nervous system is something to be given some credit.

Third – It’s still worth my while to analyze even those initial conversations a bit further to be sure I was right. I mean…So far…my spidey senses have been pretty accurate. BUT the journey of questioning myself has never been a waste of time. Because in investigating just what it is that draws me to people, and away from people….and exploring my assumptions about what draws people to and away from me…I continue to discover new nooks and crannies about myself.

If I find myself pining, silently, for a potential mate who clearly isn’t into me…I can look into that and ask “well…isn’t that interesting? What do you think is going on there?” Or if I notice something about another person that I find to be a liability and question it further, sometimes I think “wow…you really dislike something about this person AND you dislike that you dislike him/her. Why do you care so much that you don’t like them? What does it matter? Why can’t it just be enough that you don’t like him/her?”

Or maybe I’m losing my marbles…

What do you think?