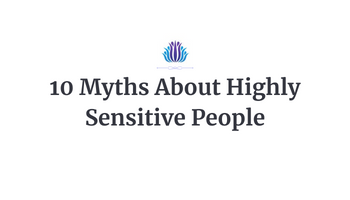 Highly sensitive people (a term coined by researcher Elaine Aron, Ph.D) are an interesting bunch. They tend to be pretty good at synthesizing information. They reflect on their experiences deeply. They tend to notice subtle changes in their environment with ease. They can also be…a pain in the a$$. Funny how we HSP conveniently forget to include that part in or description (she says with a wink).

It’s easy for people (HSP’s and non-HSP’s) to make assumptions about what it means to be a highly sensitive. Below are some of the common myths I’ve heard (along with a reality check explanation).

2. HSP’s are sweet, generous, sainted people that others should try and emulate. HA! Please. To be an HSP means having a slightly more vigilant nervous system. That’s it. Our processing might go a bit deeper than average, and our discomfort with conflict might mean we tend toward being agreeable more often than not…but believe me. We are no angels. We are just as capable of being oblivious and mean-spirited. Especially when not properly fed or permitted to retreat and recharge when we need to. Dr. Aron writes: (Being an HSP) is not about being “sensitive” in the sense of caring for and being responsive to others. Most sensitive people  are usually highly motivated and skilled at showing empathy, but many non-sensitive persons are equally or more motivated and successful at being sensitive in this other sense. Over-aroused HSP’s can actually be temporarily anything but empathic.” So if you are an HSP and think this grants you super-duper powers of niceness…go ahead and step right on off of your pedestal.

3. HSP’s are better are relationships. You would think so, wouldn’t you? With all that attention we pay to our surroundings (and by extension…to our mates). But, as it turns out, it’s a bit more complicated than that. Here is what I will say: HSP’s bring three major assets to a relationship. First, when not over-aroused they tend to be sensitive to and willing to adapt their behavior for the benefit of others. Some people will playfully even call them mind readers. This is usually because they are simply paying attention to social cues (verbal and non-verbal). Second, they will bring depth to a relationship (this is especially true as it relates to conversations).  Third, they tend to be exceptionally loyal. They don’t like leaving relationships that still show potential. Despite these obvious perks, HSP’s tend to have a harder time in romantic relationships. Their aversion to too much stimulation makes it harder to meet new people. They tend to be more shy (though this is not always the case). They struggle to find someone who can appreciate them without wanting to change them…and it’s hard for HSP’s to accept that not everyone else wants to think as deeply about EVERYTHING as they do. So it’s a combination of two problems: 1) who would be willing to put up with me? 2) Who am I willing to put up with?

4. HSP’s are smarter than the average person. Hmmmm…I don’t think so. Possibly. I don’t think anyone has taken a collective sample of highly sensitive IQ tests. But there is certainly nothing definitive to suggest we are smarter. We just tend to be more risk averse, and we tend to think deeply about things. As a result, we may do fewer stupid things and thus be viewed as being potentially more intelligent. At the end of the day, what makes a sensitive person qualify as “sensitive” comes down to these four traits (placed in the acronym DOES by Elain Aron):

5. HSP’s are psychics. NOOOOOO. Don’t even go there. I think it may be possible that highly sensitive people may detect patterns in events that other people might miss (being so attuned to subtleties in their environment). But I am not about to suggest that we can see the future. Nope. Nope. And nope.

6. HSP’s have better immune systems than other people. Not exactly. It would be closer to say that HSP’s tend to pay more attention to the subtle changes that happen in the body. That might mean they catch things sooner and are therefore willing to go to the doctor sooner. They also tend to be more conscientious. And research does indicate a very real link between conscientiousness and longevity. There is also research showing that HSP’s with stable childhoods (we are back to that again) tend to get sick less often than less sensitive children with the same level of stability at home. At the end of the day, though, I’m going to hypothesize that highly sensitive people are more thoughtful about the decisions they make and, as a result, make fewer high-risk choices. Thus they live longer – but not necessarily because they have super-charged immune systems.

7. HSP’s are all universally introverts. Wrong! About 30 percent of highly sensitive people identify as being extroverts (that is…they feel they are better able to recharge around people.) They may want the setting to be a bit quieter than the average extrovert. They may also want to retreat and have a bit of time alone that extends longer than the average extrovert might prefer. But to be sensitive is not the same thing as saying one is an introvert. The two traits are merely correlated.

9. HSP’s are almost all female. Nope! There are equal numbers of males and females that are highly sensitive. Females are just given more license to identify as such.

I know it can be tempting to see a group and try and paint pictures about what they all have in common (and the potential super powers or weaknesses they may have). But in the end, HSP’s are just people. They have as many differences among one another as they have with other non-HSP’s.